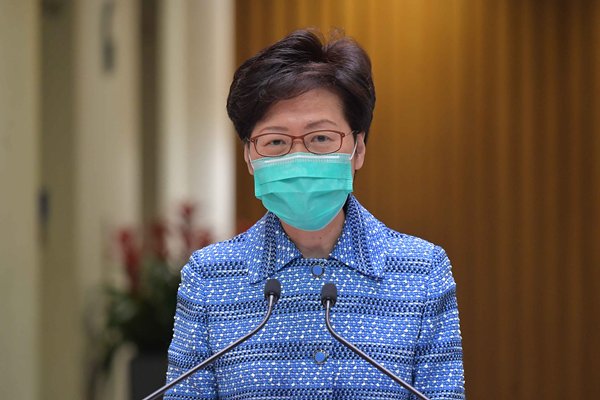 Hong Kong’s chief executive Carrie Lam has announced that the city is moving to ban alcohol sales at restaurants and bars as part of more drastic measures to curb the spread of highly contagious COVID-19 at a time when the city saw spikes of new cases.

Speaking at a press conference this afternoon, the city’s top leader Carrie Lam said she is putting forward a raft of policies including banning all visitors from entering Hong Kong and on-premise alcohol sales at eateries, invoking the powers given to her by the Prevention and Control of Disease Ordinance.

The alcohol ban will affect some 8,600 restaurants, bars and clubs  with liquor license in the city.

Arguing for the ban, Lam says when inside a bar, people might have higher risks as they will take off their masks and chat; and they might have “more intimate contacts” when they get drunk.

Such policy is not unprecedented as countries such as the UK, France, Italy and Thailand have introduced policies to suspend restaurant and bar business.

According to the government, nine confirmed COVID-19 patients were known to have visited bars and restaurants in Hong Kong’s famed nightlife district of Lan Kwai Fong in Central.

As Vino Joy News exclusively reported the co-founder of the city’s beloved wine bar La Cabane in Central has been tested positive for COVID-19 along with one staff.

However, it’s not immediate clear when the alcohol ban will go into effect or if the government will subsidize affected restaurants and bars.

The effectiveness of the ban to stop social gatherings is still up for debate as it leaves room for BYOB for large group of gatherings at restaurants that don’t have liquor license.

“People who want to drink in a bar will just BYOB from Club 7-11 (referring to convenience store 711), decreasing bars’ income and increasing that of 7-11 (owned by Dairy Farm Holdings). This whole measure falls apart after 2 seconds of analysis. Legislators who support it are populists, whether yellow or blue,” writes Elson Tong on Twitter, referring the color to anti-government and pro-government camps.

Other new measures introduced by Lam include banning all non-Hong Kong residents from entering the city for two weeks starting from March 25. Visitors from mainland China Macau and Taiwan will also be denied entry if they have any recent travel history as well.

The city managed to slow the spread of novel coronavirus in previous month but in recent days it had seen a sharp spike of infected numbers mainly due to imported cases and local residents’ relaxed attitude.

As of today, the city has now reported a total of 356 confirmed cases.