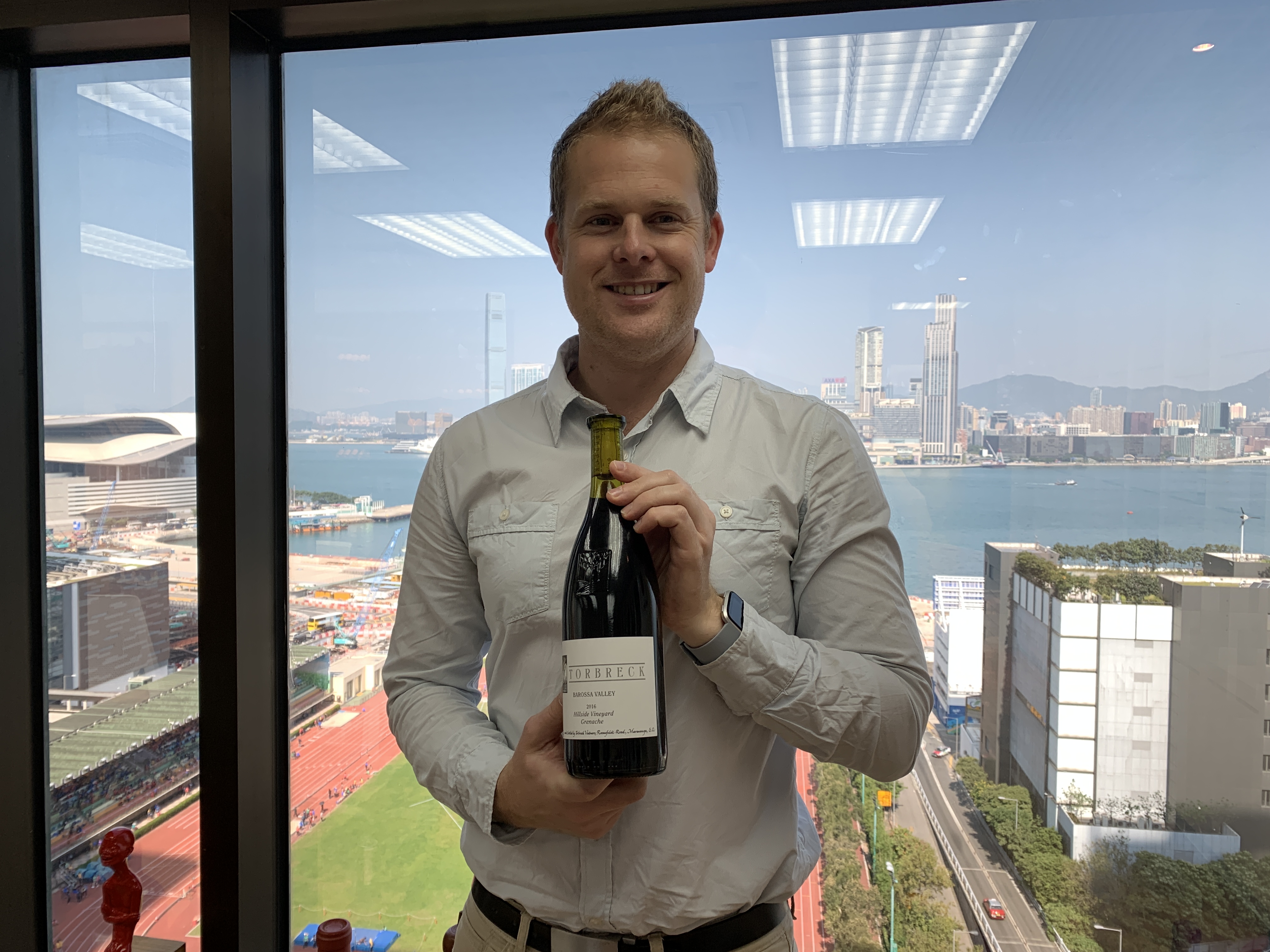 Australia’s Torbreck in Barossa has introduced a new wine to its wine range, a single vineyard Grenache called ‘Hillside’, with initial vintage being 2016, which has been hailed by the estate winemaker as “the strongest vintage” the winery has ever had.

The wine is made from a 10-ha vineyard planted with old, dry-grown bush vines with an average age of over 70 years, says Torbreck winemaker Scott McDonald when interviewed by Vino-joy at its local importer Link’s Concept’s office in Hong Kong.

According to him, the Grenache, a grape that normally has bigger berries compared with Shiraz, grown in this vineyard would bear smaller fruits. The reason as he explains is that bush vines are lower to the ground and can’t bear heavy bunches. This resulted in grapes that have “more flavors and concentration”, says the winemaker.

Located in the most southerly side of Torbreck’s all vineyard holdings in Barossa, the grapes in the single vineyard however did not all destine for the making of Hillside Grenache, with some reserved for another of the estate’s key wine, The Steading, a blend of Grenache, Mourvedre and Syrah.

“We wanted something new, a new expression and this is our response,” he spoke of the creation of the wine.

The first vintage 2016 in the winemaker’s words will go down in history as “the strongest vintage” despite a loss of 40% crop due to frost and drought.

“2016 vintage is probably the strongest vintage we ever had…We did not have a lot of yield because of frost and warm weather. All of these sound bad but these are the years we made the best vintages,” he said confidently.

Like many of his peers in southern Australia, Torbreck and many wineries have to be more alert and agile with erratic climate challenges.

One of the direct impacts of global warming on the Barossa region is erratic hot weather days and prolonged drought, which pushed wineries to harvest earlier today compared with 10 years ago.

Barossa in the past few years has reported unusual hot days and shortage of rainfall, which could stress the vines if without proper and attentive vineyard management.

“It has been a drought in Barossa for the last 10 years,” he jokes, speaking with hyperbole, “We don’t get spring rain any more. Even though they are dry grown, their roots are very deep and they can look after themselves.”

“We use a trellising system that resembles an umbrella and create shade for the grapes. It’s very simple but effective,” says the winemaker. “We are looking for dappled light but not direct and long exposure of sunlight.”

Production of the new wine Hillside Grenache is roughly around 3000 bottles, and the latest 2017 vintage will only be released in key markets in the US, the UK and Asia and targets top restaurants.

“We want to be on the best restaurants along with best of Bordeaux, with Margaux, Lafite, with the Burgundies and Champagne,” he states, confident in the wine’s quality.